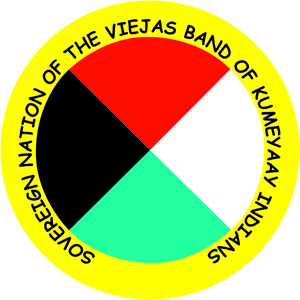 The Viejas Reservation is located in southern California, 35 miles east of San Diego, north of interstate 8 and the city of Alpine, approximately 30 miles north of the Mexican border. It is surrounded by the Cleveland National Forest. The reservation was established by an Executive Order in 1934.

The Viejas Band of Mission Indians is part of the Kumeyaay Indian Nation of southern California. Their language belongs to the Hokan language group; languages included in this group are spoken by peoples from southern Oregon to southern Mexico. The Viejas Band is one of 12 Kumeyaay bands. Traditionally, the Kumeyaays depended upon the land for their subsistence, not only gathering the area’s native plants and hunting wild game, but also farming within a complex system of agricultural landholdings. The area’s heavy concentration of Spanish missionaries, with their zeal for assimilation, adversely affected the Kumeyaay people’s Native language and culture retention.