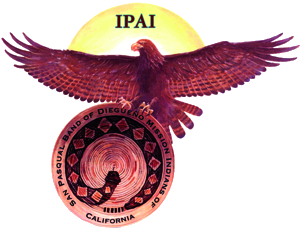 The current San Pasqual Reservation is comprised of five separate, noncontiguous tracts of dry, scrub-oak hill country in southern California. It adjoins the rural community of Valley Center approximately 40 miles north of San Diego, 12 miles from Escondido, and 25 miles inland from the Pacific Ocean. The original reservation was established July 1, 1910, under authority of an Act of January 12, 1891, as amended and supplemented. An Executive Order issued on April 15, 1911, set aside land for the reservation site, with an annex in 1972.

Residents of the San Pasqual Reservation are members of the Kumeyaay Tribe. Their language belongs to the Yuman branch of the Hokan language family, other languages that are spoken by peoples from southern Oregon to southern Mexico. In 1769 Kumeyaay territory extended 50 to 75 miles both north and south of the Mexican border and from the California coast east nearly to the Colorado River. Prior to European contact, the tribe was divided into as many as 50 bands, but two tribal chiefs served to maintain cohesive intertribal relations.

The San Pasqual Tribal Government operates under a constitution and bylaws approved January 14, 1971. The tribe is organized under the Indian Reorganization Act of 1934. The general council consists of all members 19 years of age and older; members elect a business committee which serves two-year terms and is comprised of a spokesman, a vice-spokesman, a secretary-treasurer, and two at-large members.