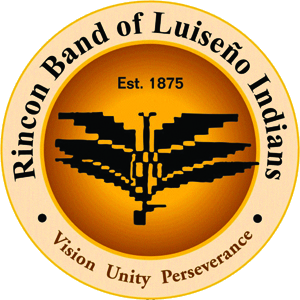 The Rincon Indian Reservation is in the northeastern corner of San Diego County, California, along the San Luis Rey River. The Rincon Reservation was established by an Executive Order on December 27, 1875. A second Executive Order on March 2, 1881, increased the land area of the reservation. The reservation was officially established on September 13, 1892, under the authority of the Act of 1891. Tribal headquarters are located in Valley Center, adjacent to Harrah’s Rincon Casino.

Members of the Rincon Band belong to the Luiseño Tribe. Since the founding of the Rincon Reservation more than a century ago, residents have utilized their fertile soil for agriculture and livestock. By 1910 the average annual income of the reservation matched or exceeded that of local non-Native famers.

The tribe is organized under Articles of Association that were approved on March 15, 1960, by the secretary of the interior. A general council and a tribal business committee oversee the governing of the Rincon Reservation. The five-member elected business committee includes a chairperson, vice-chairperson, and three committee members. Council members serve two-year terms. Tribal government programs include an education committee and Indian Child Welfare Act Committee.