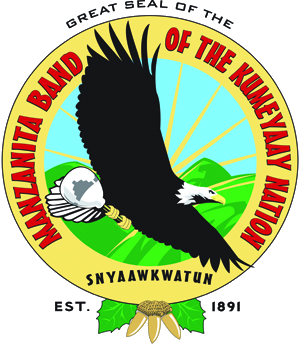 Manzanita Band of the Kumeyaay Nation

The Manzanita Reservation is located in southeastern San Diego County, California. Manzanita adjoins Campo Indian Reservation on the south and La Posta Reservation on the west. It is about 67 miles east of the city of San Diego on Interstate 8; the town of Boulevard is six miles away. The reservation lies within 10 miles of the U.S.-Mexico border. The reservation was established on 640 acres in 1893 under authority of an Executive Order of 1891. The land base was increased by Departmental Order in 1907, and it is held in trust by the U.S. government.

Members of the Manzanita Band belong to the Kumeyaay Nation. The Kumeyaays’ traditional territory extended north and south of the Mexican border from the Pacific coast almost to the Colorado River. The Kumeyaays are speakers of the Yuman branch of the greater Hokan linguistic family.

All tribal members 18 years and older make up the general council which governs the tribe. An executive committee, which consists of the tribal chairman, two committee members, and a secretary-treasurer, is elected by the general council to run the routine activities of the tribal government. The tribe is organized under an IRA constitution and bylaws approved in 1976. In addition to the administrative department, the tribe maintains a housing committee and grants management office.