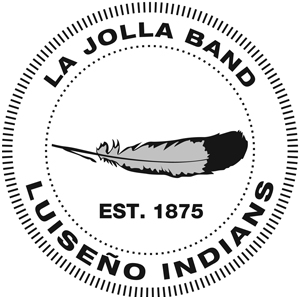 Members of the La Jolla Band belong to the Luiseño Tribe. Tribal members have resided in the region for thousands of years. Luiseño traditional territory originally covered roughly 1,500 miles of southern California to the north of the Kumeyaays’ land, including most of the San Luis Ray and Santa Margarita drainages. The Luiseño language is of the Cupan group of the Takic language, a subfamily of the greater Uto-Aztecan linguistic family. The term Luiseño is derived from the San Luis Rey Mission and has been used in Southern California to refer to those Takic-speaking people associated with the mission.

The reservation is a PL-638 tribe governed by general council composed of all tribal members age 21 and older. The five-member elected tribal council includes a chairperson, a vice-chairperson, and a secretary-treasurer. The tribal council meets monthly and serves two-year terms. The tribe is organized under a non-IRA Articles of Association that was approved in 1962. The La Jolla Tribal Government developed one of the first tribal employment rights offices in California. Government departments include education and culture. The tribe does not maintain its own law enforcement department. However, it is in the process of developing a program through contracts with the BIA and the county sheriff’s office currently provides services.