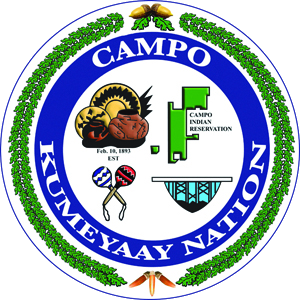 The Campo Indian Reservation is located in southeastern San Diego County atop the Laguna Mountains. The reservation was established on 710 acres on February 10, 1893, following an Executive Order on January 12, 1891. Eighty acres were added on February 2, 1907, and 13,610 acres were added on December 14, 1911. Later additions brought the reservation to its current size. All land on Campo is tribal-owned land; there are presently no allotments or assignments.

The Campo people are part of the Kumeyaay Indian Tribe, whose historic territory reached from northern San Diego County to the Salton Sea and 50 miles into Baja California. The Kumeyaays first encountered Spanish explorers in 1542. Over the next 200 years, the Spanish continued to arrive along the Pacific coast and venture inland. Contact between the Spanish and the Kumeyaays was violent, but the Kumeyaays managed to escape capture or confinement numerous times.

The tribe is organized under a non-IRA Constitution that established a legislative branch, an executive branch, and a judicial branch. The seven-member elected executive committee includes a chairperson, vice-chairperson, secretary, and treasurer. Officers serve four-year terms. The executive committee serves as the overall economic development plan committee as well. The judicial branch represents the tribe in matters involving the BIA, the federal and state courts, and the tribal environmental court.