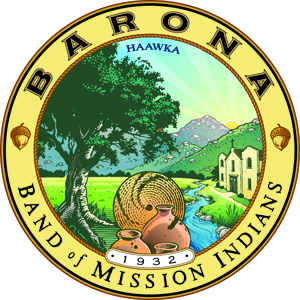 Located in the mountain foothills of San Diego County, approximately 30 miles east of San Diego, the Barona Reservation spans 5,900 acres of flat and rocky terrain. The reservation was created in 1931 upon 5,900 acres purchased by the federal government for Kumeyaay tribal members residing on the Capitan Grande Indian Reservation.

The residents of the Barona Reservation, located in traditional Kumeyaay/Diegueño territory, are descendants of the Hokan-speaking peoples, an ancient language group found throughout California and on into southern Mexico. They are one of 12 bands of the Kumeyaay/Diegueño Tribe. The coastal country and the Salton Sea margins contain archaeological evidence suggesting that they are some of the oldest known Indian-inhabited areas in the United States; middens, or refuse heaps, have been found that date back some 20,000 years.

The Barona Reservation is currently governed by a seven-member elected tribal council, including a chairman and vice-chairman. Members of the council serve four years. The tribal council conducts all business for the band, including those activities related to planning and economic development. Decisions on land or other tribal resources are referred to the general council, composed of all the tribe’s voting members.